The HASELOH PIPELINE LEAK DETECTION™ system can detect even minute changes in pressure.  The computer at the main station then alerts the operator there is a leak in the pipeline. The built in diagnostics of the system can pin-point through the point to point reference the exact line where the leak occurred. This empowers the operator to take quick and decisive steps to mitigate the damage that would occur from this leak.  Once the operator has taken the appropriate action, they will reset the unit to alert him if any other problems exist.

In the event that no operator is present, the HASELOH PIPELINE LEAK DETECTION™ system is equipped to activate any call out system to alert the operator by paging, texting, phoning, or to contact him through an answering service.  As well, the operator has the ability to log into the system to view any alarms from any computer with a web connection.  This allows operators to answer alarms and determine the appropriate response from virtually anywhere. 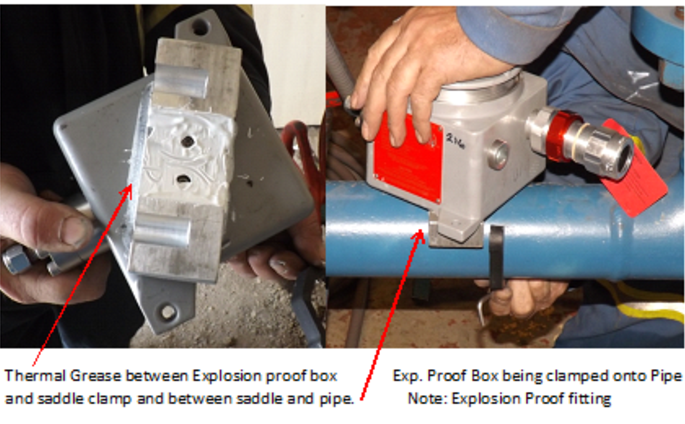 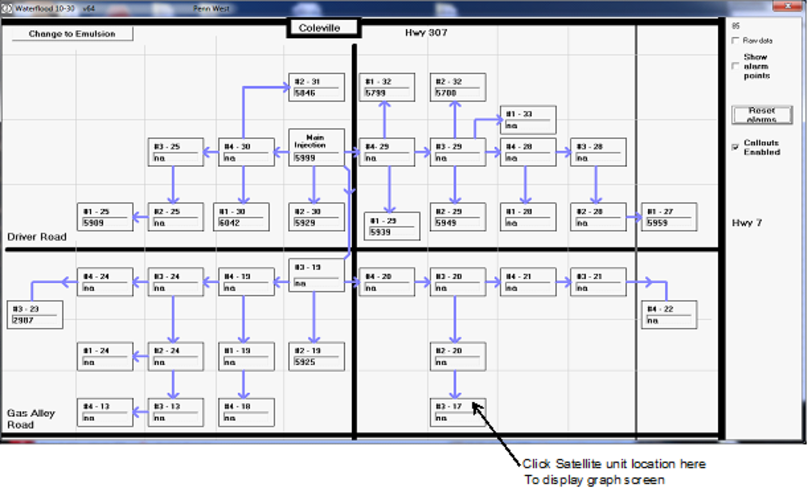 Simply clicking on the particular unit location on the satellite box brings up the unit specific graphic display page. On this page the operator can adjust the alarm and other settings, as well as view a more detailed, past trend graph view of pressure readings. Default setting is for 1 day, or past 24 hours, the top right hand side of the screen gives a box where an operator can select day, week or 6 hours.  Clicking the back arrow buttons on the bottom left corner of the screen allows an operator to go back and view the past 3 month history of the accumulated data.

The following graph displays a standard system that using two main pumps that are supplied by two tanks. The pumps are controlled by a tank level switch and when the level in the tank drops one pump is shut down.  When the level is replenished the pump starts back up again.

The HASELOH PIPELINE LEAK DETECTION™ System provides unprecedented protection for pipelines.  Leaks can be detected within two minutes from a hole smaller than the size of a pencil (1/4 of an inch). A unique proprietary isolation gland protects the electronic sensors that would normally plug off or freeze when installed on a pipeline. Mechanical temperature compensation allows all sensors to remain within 2° F of each other across the span of the pipeline. This temperature compensation allows the pressure sensors to be extremely accurate to one another without the need of highly complex computer software.

The well head units (IMELDA™) reference each of their pressures to the satellite that is serving them. The satellite units are then referencing their pressures to the main pumping station, or other pressure source, that serves them. This gives a complete view from start to finish at each branch of the system. Each well head, satellite unit and main pumping station then acquires and stores a pressure reading every 2 minutes, giving a snapshot view of the entire system. This gives a view of the relationship between all points at the same time, so that any changes that occur between these pipeline elements can be displayed in a fashion that is usable by the operator.

All IMELDA™ units in the HASELOH PIPELINE LEAK DETECTION™ system “wake up” at a predetermined time and capture and store the pipeline pressures. When not transmitting or collecting data, all the individual units will go into a “sleep mode” to conserve battery power which is maintained by solar panels. The individual IMELDA™ units then wake up and transmit the data back to a computer during a specific time period so as not to overlap radio or cellular transmissions. The proprietary software and patented hardware then tracks any changes in pressure, temperature, and records the time of the reading. The data can then be displayed as a graph by clicking on the land location number on the satellite box of the main display.

The HASELOH PIPELINE LEAK DETECTION™ System is designed to operate on Windows based PC's using a custom built graphical interface. Each operator interface program is specifically designed for your installation. An intuitive, map based interface allows operators to interact with the Patented system installed on your pipelines with minimal training. Each satellite unit (IMELDA™) is labeled and displayed on a basic map for ease of locating and identifying.

The main screen displays each unit location (IMELDA™) and current status, allowing operators to quickly view the status of all sites. Main and secondary roads are shown in black and pipeline direction is shown in blue 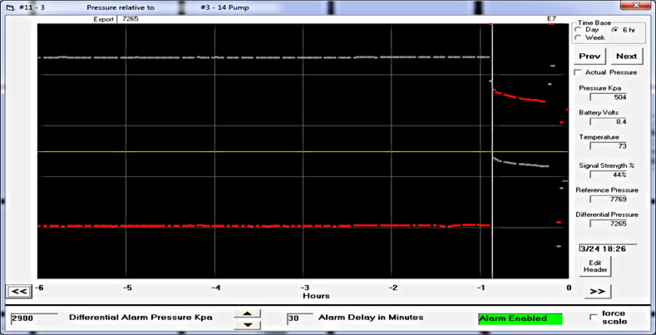 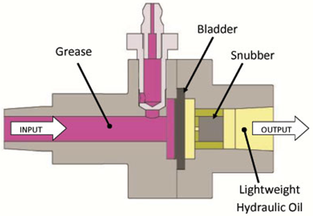 The liquid pressure inside the pipeline pushes against the grease, which

the lightweight hydraulic oil, to the pressure sensor. With this system, the

pressure transducer and filter (Snubber), the parts most likely to plug off

from foreign particles, are never in contact with the process medium. The

transducer only ever comes in contact with clean, lightweight hydraulic oil;

preventing any freezing or plugging off.

As liquids are incompressible, the pressure sensors at the main pumping station, satellites and well heads track each other very closely.  Pressures can vary quite dramatically across a pipeline depending on pipe size and distance from the pumping station.  A relationship is tracked between each point of the pipeline system.  A sudden drop in pressure from normal pressures between given points indicates an external influence has occurred and caused a change within the system.

The following graphic screen shows an actual leak on a water flood pipeline. The distance between the main pump and the satellite shown was approximately 4 miles.  Note:  The satellite pressure (red line) has risen above the main pump pressure (grey line). This is the exact opposite to what a normal run profile is. The date and time of when leak occurred was at 3/24 18:26 (white vertical cursor line on graph below at start of leak).  The leak was detected 2 minutes after the last data transmission of 3/24 18:24 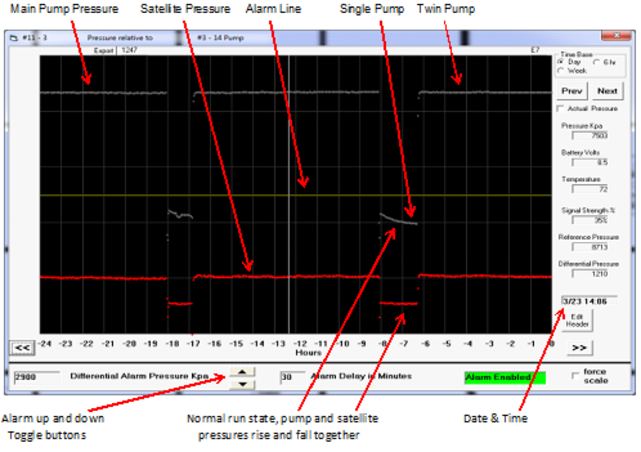 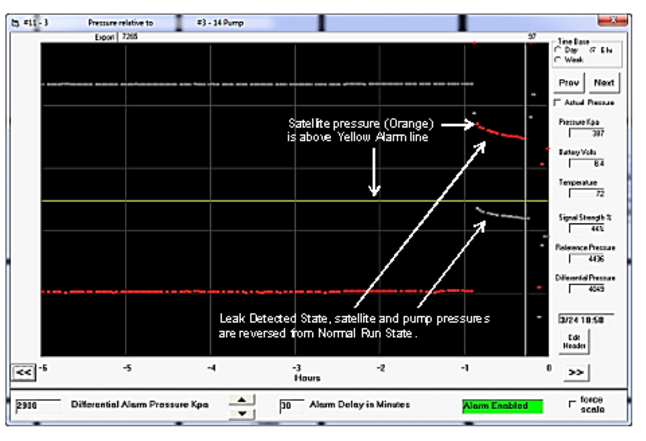 ​HASELOH INNOVATIONS has developed a two-part bladder system called the Isolation Gland. This system creates a three part physical barrier between the measuring device and the media to be measured.

Plugging Off of Sensors

A common problem with any pressure measuring device, be it a simple pressure gauge or an electronic transducer is plugging up from contaminants or freezing off in subzero temperatures.

Each IMELDA™ pressure measuring unit incorporates a unique and proprietary

Isolation Gland, which isolates the pressure transducer from the process media.

by any contaminate that gets inside of them.  In an effort to protect these

sensors/transducers, filters (snubbers) are often installed between the process

liquid and the transducer. These filters are a very fine mesh that will become

rapidly plugged because of rust, dirt, and any other contaminates inherent in

any pipeline. As these filters get plugged up by contaminates, the pressure

transducer in any system will be rendered useless. The computer will read no changes in the pipeline pressure. During initial tests it was found that every system that had a pressure sensor in contact with any production fluid failed. These failures were sometimes within minutes, but always within days. The cause was always the same; the sensors were plugged off or destroyed completely. This was a major problem in the first systems that were tested during development of the

Sensor Freeze Up and H2S Corrosion

The proprietary Isolation Gland also has another function of eliminating freeze off. If you screw a gauge or transducer to a pipeline, it is generally about 6” above the pipeline, and screwed into a ball valve. The water, oil, emulsions, and contaminates that are present in any pipeline will migrate up through this opening in the pipeline. Cold temperatures can freeze the medium and the gauge, or transducer, will become inactive or even burst. 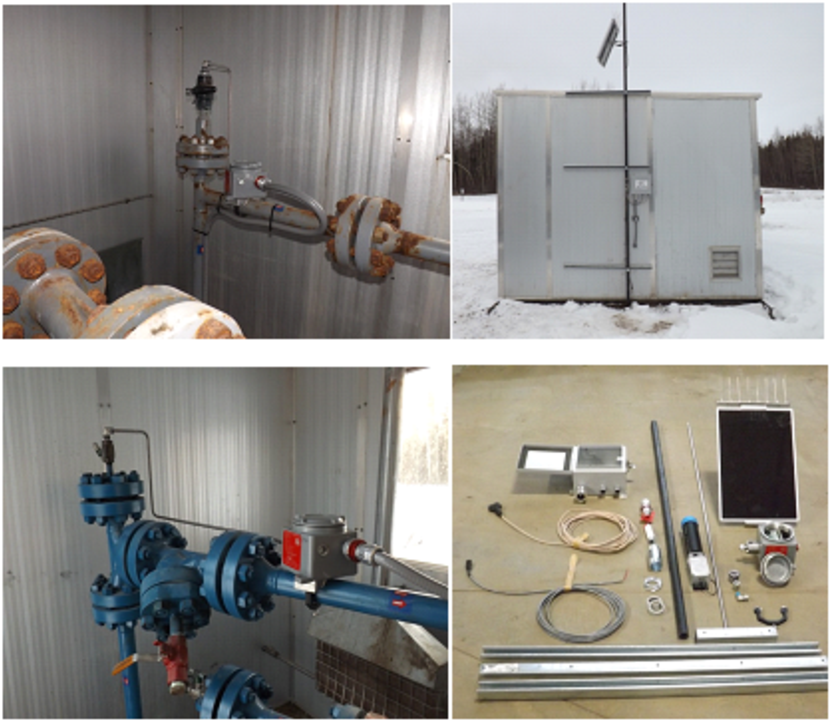 The Isolation gland system is manufactured to be replaced as a modular unit. This unit can be changed in minuets and does not require removal of the explosion proof box and related electronics and wiring from the pipeline.

Made in Canada Oilfield Solutions

​A division of Metro Tanks Ltd.

The leak was detected and an operator was called out by the HASELOH PIPELINE LEAK DETECTION™ system.  The operator shut down the pipeline at the satellite that was feeding this satellite.  The elapsed time was 32 minutes from detection to shut down of the leak.  White vertical cursor line on graph below at shut down of leak at 3/24 18:58.

Placement of the IMELDA™ Units

The accuracy of the HASELOH PIPELINE LEAK DETECTION™ system is based around placing very accurate pressure transducers with temperature compensation at intervals all along the pipeline system. All of these units then reference their pressure to the pressure found at the main pumping station. This data is then transmitted to the main office computer which tracks these pressures

Temperature variation has always been a factor in maintaining the proper collection of accurate data from any electronic sensor. Thus it is a vital component to the HASELOH PIPELINE LEAK DETECTION™ system to maintain sensor temperatures within an acceptable range at all the sites where the system acquires pressure readings for data transmission and analysis.

It is a known fact that sensitive electronic pressure sensors may have wide variations in electrical outputs, even when dealing with two of the exact same transducers, if they are measuring in different temperature zones. One of the key elements to this patented system is the simple but elegant mechanical temperature compensation.

HASELOH INNOVATIONS has developed a clamping fixture that assures the temperature at each pressure transducer remains consistent, based on factory tested criteria, with the media being measured. This clamping fixture is bolted to the bottom of the explosion proof enclosure. This fixture is accurately machined to fit the exact size of pipe it will be mounted to.  Thermal grease is placed between the aluminum fixture and the aluminum explosion proof box, and between the aluminum fixture and the pipeline. This grease coupled with the heat transferring properties of aluminum enhances the radiation of the liquid temperature from process medium up to the pressure transducers that are mounted in the aluminum explosion proof enclosure.

Other systems have to rely on complex look up tables in the software to track and adjust the pressures. This makes the software extremely complex, and correspondingly expensive. Temperature compensation done with look up tables requires a very powerful computer to run the system. The more complex that the software is, means more things that can go wrong with the system.

The HASELOH PIPELINE LEAK DETECTION™ system requires minimal processing power and thus can be offered to a client at minimal cost to them.